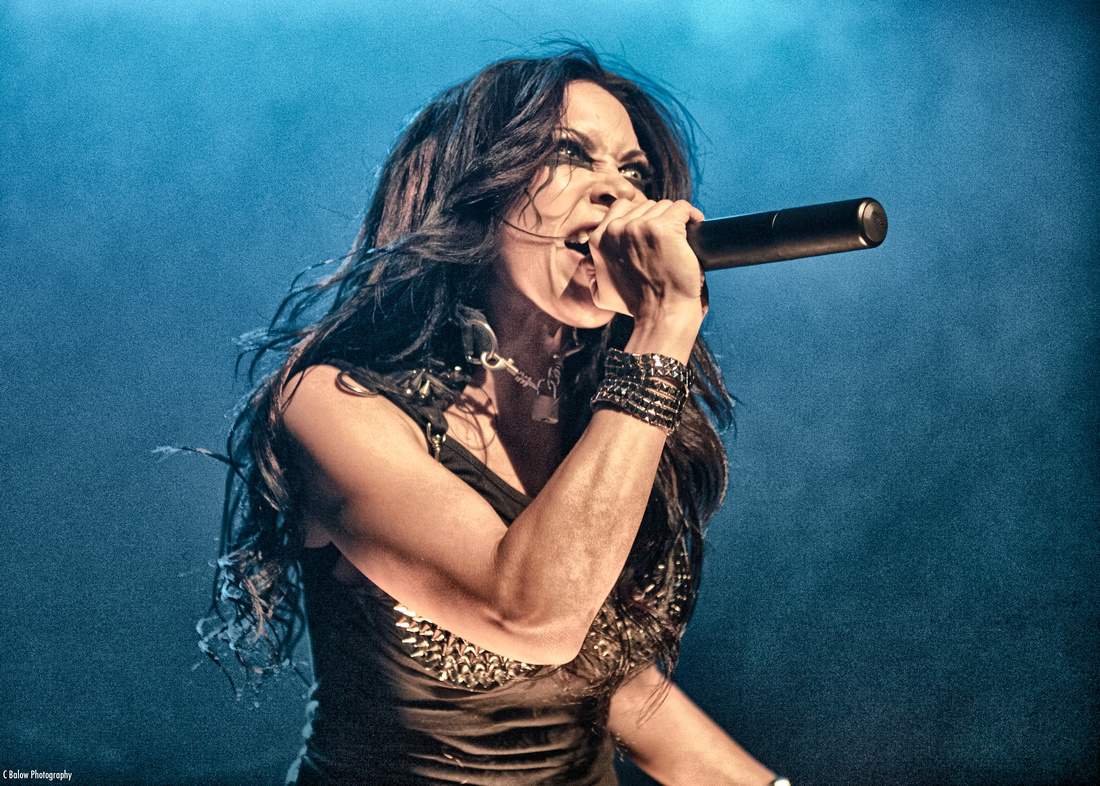 As most of you know, Butcher Babies have been tapped as the opening band for the “Hey, Cruel World Tour” directly supporting shock-rocker Marilyn Manson. I had an opportunity to sit down with the Butcher Babies: Carla Harvey (vocals), Heidi Shepherd (vocals), and Henry Flury (lead guitar) and interview them at The Fillmore Detroit on 1/22/2013. In the past, they have made headlines with their scantily clad stage appearance, crushing guitar riffs, and flesh covered in fake blood.

VR: Heidi: In 2001 you prophetically stated that you wanted to tour with Marilyn Manson. Now that it’s happening do you believe that putting that statement out in the universe made the happen?

Heidi: “I honestly do believe that things that you put out into the universe will manifest them themselves if you believe them enough. At the same time I don’t think that us, sitting on out butts would have got us this tour with Manson. It has taken a lot of hard work and dedication from every member in the band.”

VR: Carla: Manson is from Ohio; Alice Cooper and yourself are both from the Detroit area is there something about being from the Midwest that makes people from here start a theme metal band?

Carla: “Honestly what I think is come from sheer boredom. You are trapped inside for a good six months out of the year when it’s raining, snowing, or just bitterly cold.  So literally, all you have it what is your mind. You use your imagination to keep you company and for me when I was a kid I wrote comic books all day, listened to heavy metal, and dreamed of being in my own band. We live in California now and there is always a distraction like going to the beach or doing anything else. Michigan wasn’t really like that. “

VR: I saw that you had interviewed Alice Cooper for Revolver TV; did he give you any words of advice?

Carla: “ He is such an amazing person, and he and I talked about Detroit after the interview. Funny enough he is actually related to my mom, she is an Italian girl and they are cousins.  I didn’t tell him that we were distant cousins but when I was interviewing him I had to stop for a second because I was so tripped out in my own head because I was interviewing on of my biggest idols. It meant so much to me and I was really lucky to have been able to do that.”

VR: It’s been pretty widely documented that Manson collects some weird things; do any of you collect anything out of the ordinary?

Henry: “Skulls, I collect them and so does Carla, but not the real kind. She collects them more than I do.”

Carla: “I had a fan bring us skulls (one for her and Heidi) last night. It’s awesome when our fans know what we love and bring us stuff! Henry collects girls panties that get thrown on stage.“ (Laughter erupts from the group)

Heidi: “When I see Henry in the morning I ask ARE THOSE MINE?”

Heidi: “It’s a complete mix, when we first started we were hoping for the first way and then it swung the other way, but it has been an even mix.”

Carla: “Even age wise we have had such a vast age group of people that like us. Tons of women love us and tons of men too.”

Heidi: “Last night we had a show in Joliet, IL and there were two young girls in the front row who were singing our lyrics. That is why we do this because we were those young girls.

Carla: “ Our songs are for those girls because that is what we were like growing up as misfit girls.”

VR: What is the craziest thing that you have seen on tour thus far?

Carla: “I was trying to explain meeting him to my mom today and I couldn’t even talk about it.”

Henry: “We’ll just say this, he was a very nice guy but he is a very forward man.”

Heidi: “He came over to us after the show and was very complimentary about our band. He is not afraid of anything. I think it’s the weirdest thing that has happened on this tour.

VR: What made you say he is not afraid of anything?

Henry: “He speaks his mind and he is very vocal.  I mean you are Manson’s dad. Mr. Marilyn Manson Sr. you are going to say whatever you want.”

VR: You mentioned some of the younger fans; when writing lyrics today do you feel you have to dial down some of the lyrics because of current events?

Carla: “We don’t really feel the need to we have always tried to keep this band full throttle.  No matter what is going on we are going to be true to our stage show. We are not going to dial it back for anyone or anything.“

Heidi: “We are definitely respectful in anything going on, but there is nothing that we are doing that is disrespectful.”

Heidi stops me before I can ask my next question. She and Carla got dressed separately today and are wearing matching outfits. They insist that I get a picture of them matching in their outfits. 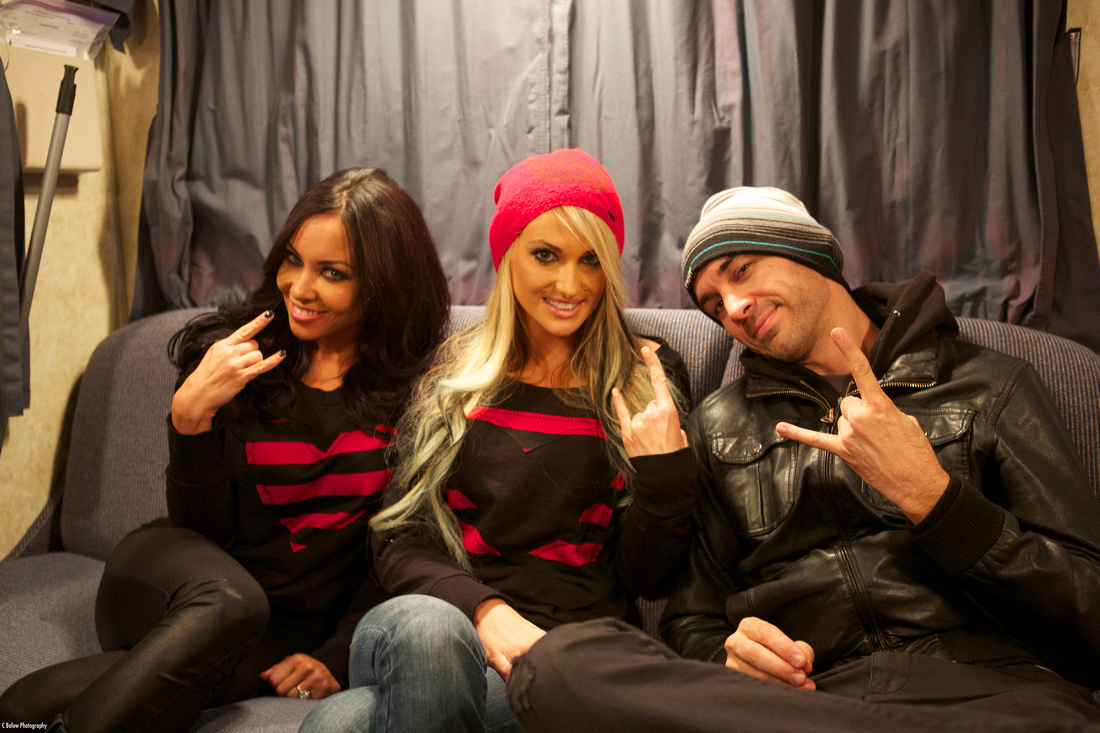 VR: Pick one band right now to open for right now that you haven’t toured with?

VR: Same question in reverse you are now the headliner, pick one band to open for Butcher Babies.

Henry: “Oh man that is tough. I am going to say 9 Electric.”

VR: You talk a lot about writing about thing you are afraid of, what is one thing you have yet to write about that makes you afraid.

Carla: “I think for me that one of the things that was really hard to write about was making a change. It’s coming up on a current song that has yet to debut. It was about growing up and the things that hurt us.”

Heidi: “Carla and I have had similar experiences and it about the things that were wrong in our childhoods that prevented us from growing into the adolescence that we could have.  It’s things about our childhood.”

Henry: “I write riffs that are really just too hard to play. The scare me, I am definitely afraid of those.  I wish they would kind of just go away.

VR: What is something that you learned about Manson that you didn’t know before.

Heidi: “I didn’t know what to expect when I first met him. The first time we saw him was the second show into the tour he was like “Come over here, come say hi” (pantomimes hugging). He has been 100% nice and respectful to us.

Carla: “ That he is a huge fan of the film Django. He has been speaking with the Django voice for most of the tour. He is as big of a personality on stage as he is when you speak with him.  He is in real life who you see on stage!”

Check out images from  the Butcher Babies performance here: