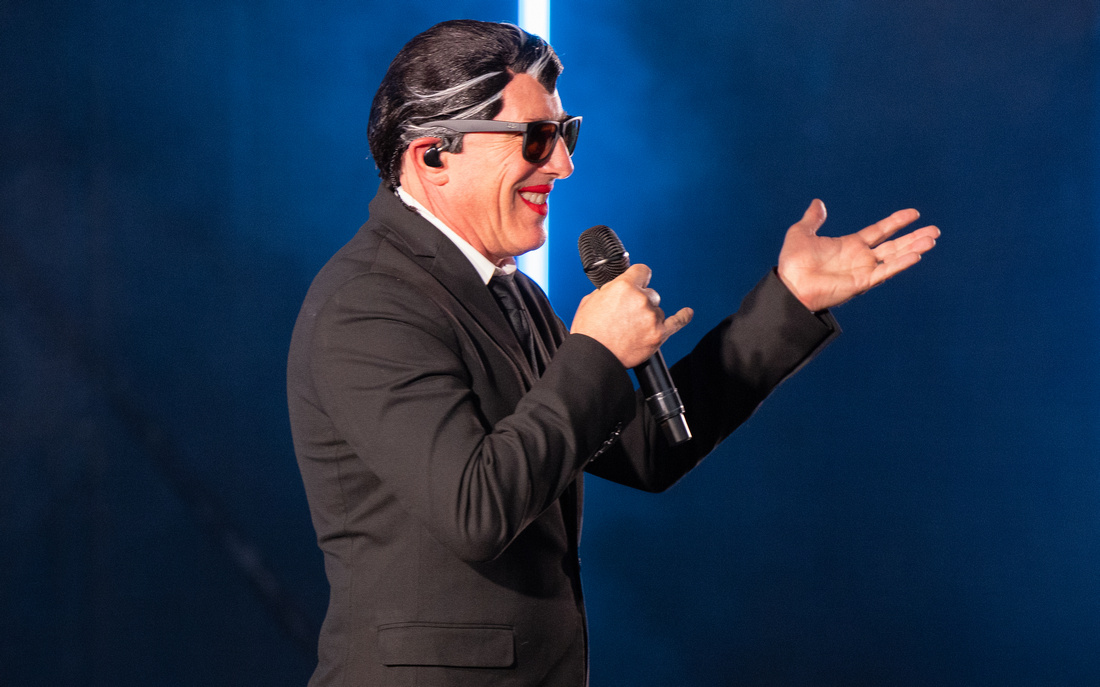 They have ditched their nacho libre masks and boxing ring from past tours for a spaceship.  The patrons are greeted by a video of agent Dick Merkin (Keenan) explaining that the trio are tracking down space creatures, who themselves are in pursuit of the recurring Puscifer character. We quickly learn that the Hollywood actors and actresses  are byproducts of a secret alien cloning program. The show is packed full of aliens and comedic satire wrapped in heavy synthesizer music.

Merkin also makes sure that the audience knows their role in the story. They need to be awake, attentive, and (most importantly) not inhibited by their mobile device. He goes on to explain that if anyone from the audience is caught using their cell phone, that they will be tossed into a giant meat grinder only to become the spicy additive in SPAM. The agents even point out a planted concert goer who is quickly extracted from the audience for grinding. “SPAM, SPAM, SPAM!,” they chant. Even the highly coveted poster from tonight is the many-armed Indian God, Durga, depicted as an alien. That’s really the whole point of a Puscifer show, to have fun and be weird. 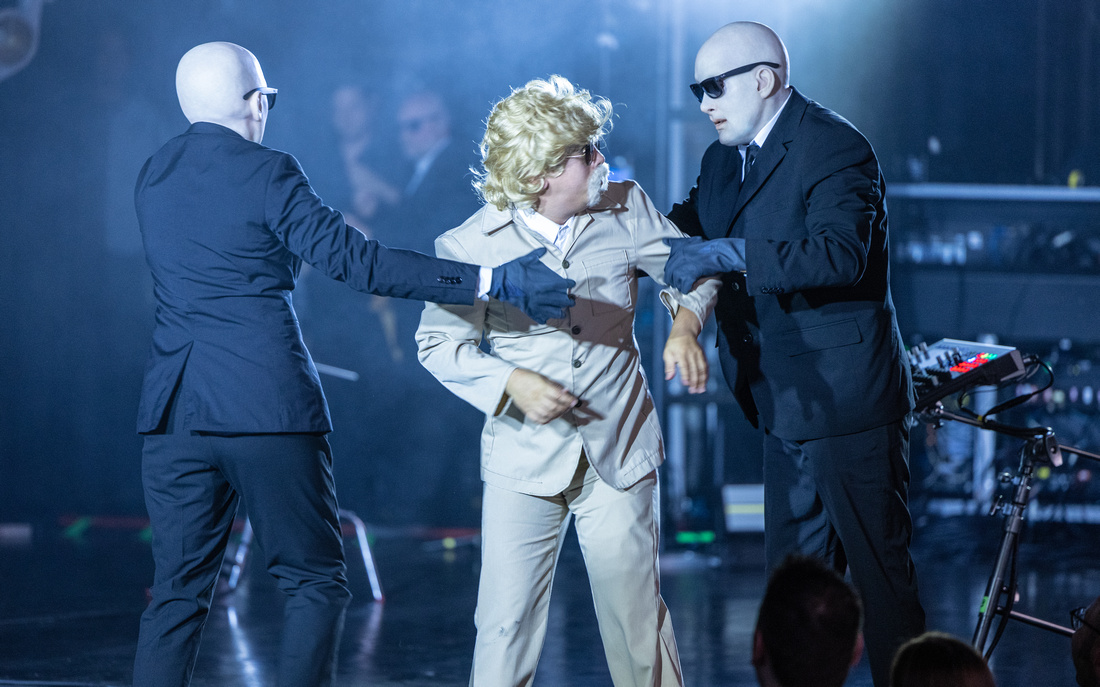 But let’s not forget that there is music too!  Songs like opener “Bread And Circus” and “The Underwhelming” are dazzling electro-pop works, with the latter mixing robotic keyboards with a sludgy guitar one moment, before switching for a more relaxed groove, and then back again. It’s cool, difficult not to get caught up in, as you partake in all the visual accompaniment on stage. It’s a vibe that continues through Gray Area, in which Maynard sings of ‘An age of confusion’, which, quite honestly, could be talked about almost any time, but seems to be even more relevant over the last several years.

A Perfect Circle guitarist Billy Howerdel lent his talents as a warm up to Puscifer, touring his new music from the album “What Normal Was.” Co-produced by NIN contributor Danny Lohner, the songs are a solid offering highlighted by some of Billy’s biggest influences like Depeche Mode. Standout tracks like “Selfish Heart” and “Poison Flowers” show that he has command of his craft and the audience seemed to love the set. 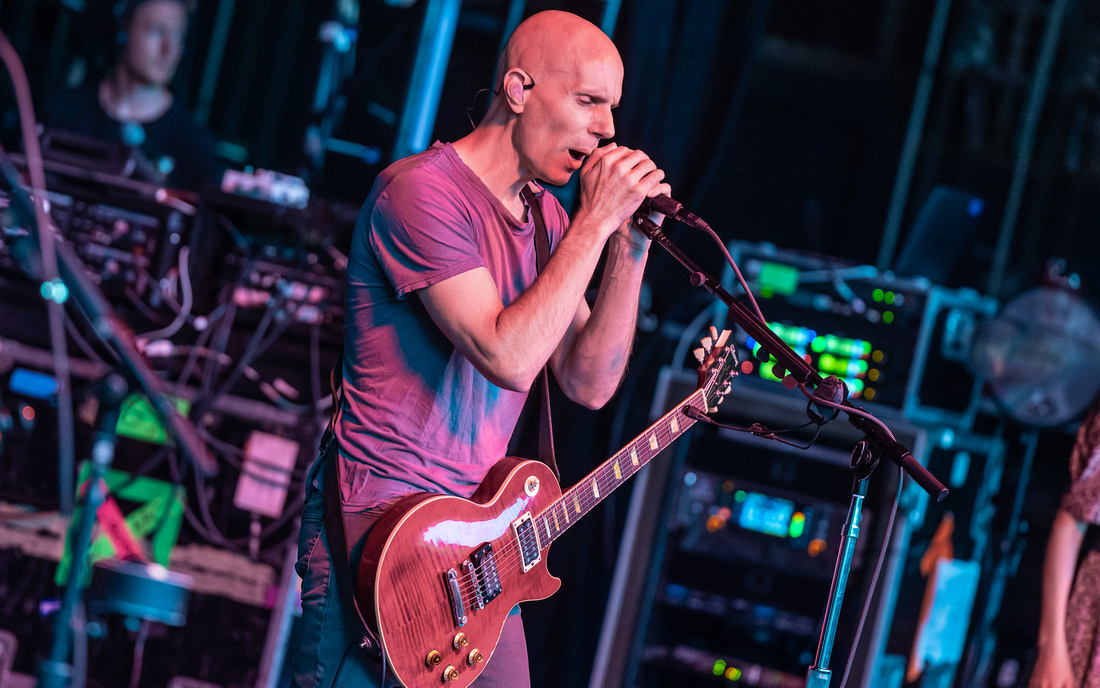 The beauty of a Puscifer show is that it can be taken any way you like depending on how you look at them. It is more than enough that the music on Existential Reckoning is fantastic. If you attempt to get a look under the covers  there are many riddles to discover with this band. You’ll never totally figure them out, but Puscifer is best left as weird and unexplained. 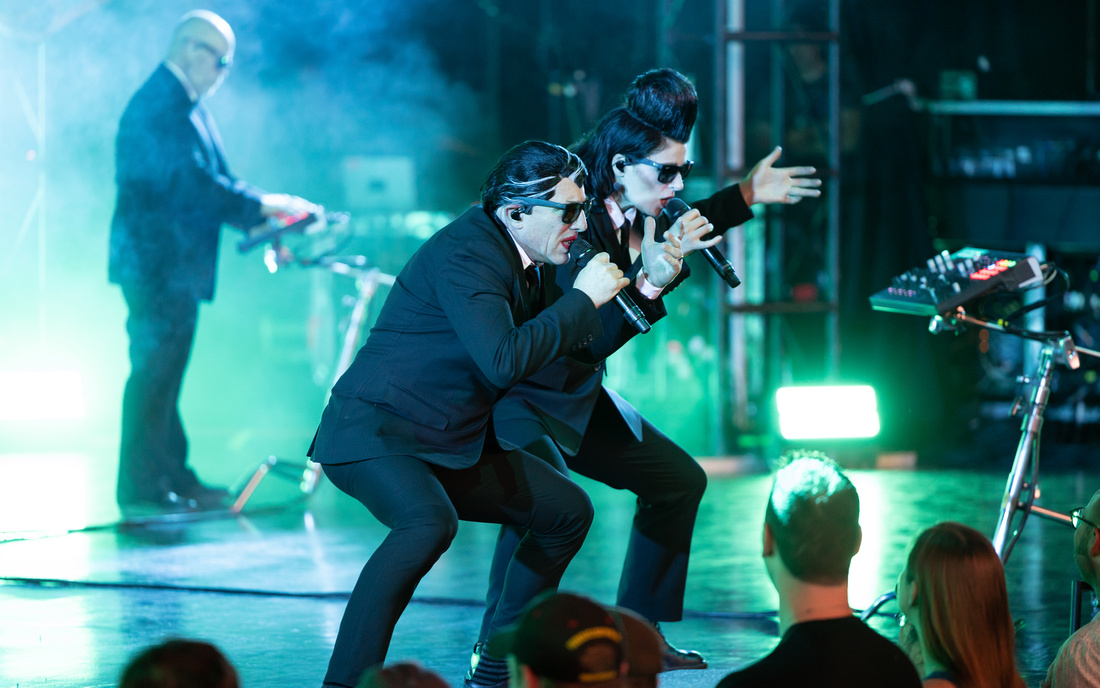 16.) Conditions of My Parole